Internet: Mobile VS Desktop - An Analysis

This month In May (yes i first started this article in May, then other projects got in the way and i had to re-prioretize everything) for the first time mobile web usage has reached 10%, but what i found relevant is the fact that since 2010 the desktops usage kept shrinking more and more each month (and the path is accellerating). 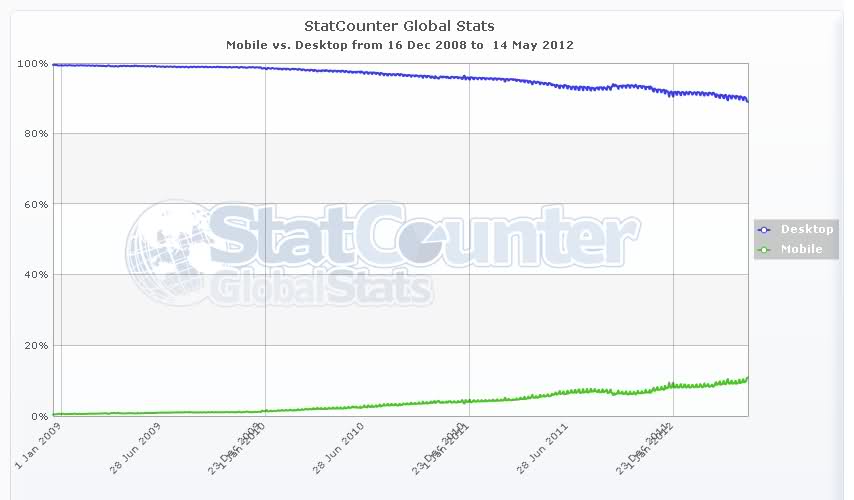 If we look at local market we find that the mobile usage has its pick in (you could never bet it) Zimbabwe at more than 58%, not in US, not in Europe, not in Japan, but in Africa.

What does it mean?

That does not mean that they have more mobile usage than the most developed country in the world in absolute, it’s relative to their population.

Let’s dive in some raw data about the population of each of them:

[These are the most recent data that i found unfortunately.]

To make it even more understandable suppose that all these 3 countries had the same population: 100 million. The population with mobile internet access would be:

What I read: It means that they didn’t have computers because they couldn’t afford it, but now they have ehough money to buy electronic devices and instead of traditional pcs they’re buying smartphones and tablets and they use them massively to surf the web.

IT companies should focus more on these new growing markets if they want a long term - worldwide - success.

The data btw is unbeliavable.

1.If felt like i had to quote this. From the population page of Zimbabwe:

note: estimates for this country explicitly take into account the effects of excess mortality due to AIDS; this can result in lower life expectancy, higher infant mortality, higher death rates, lower population growth rates, and changes in the distribution of population by age and sex than would otherwise be expected

So sad. I still believe in a fair future, free from curses like AIDS and Cancer. If you haven’t donated yet, please do so.

Let me know if I got anything wrong. And as usual feedback is appreciated.